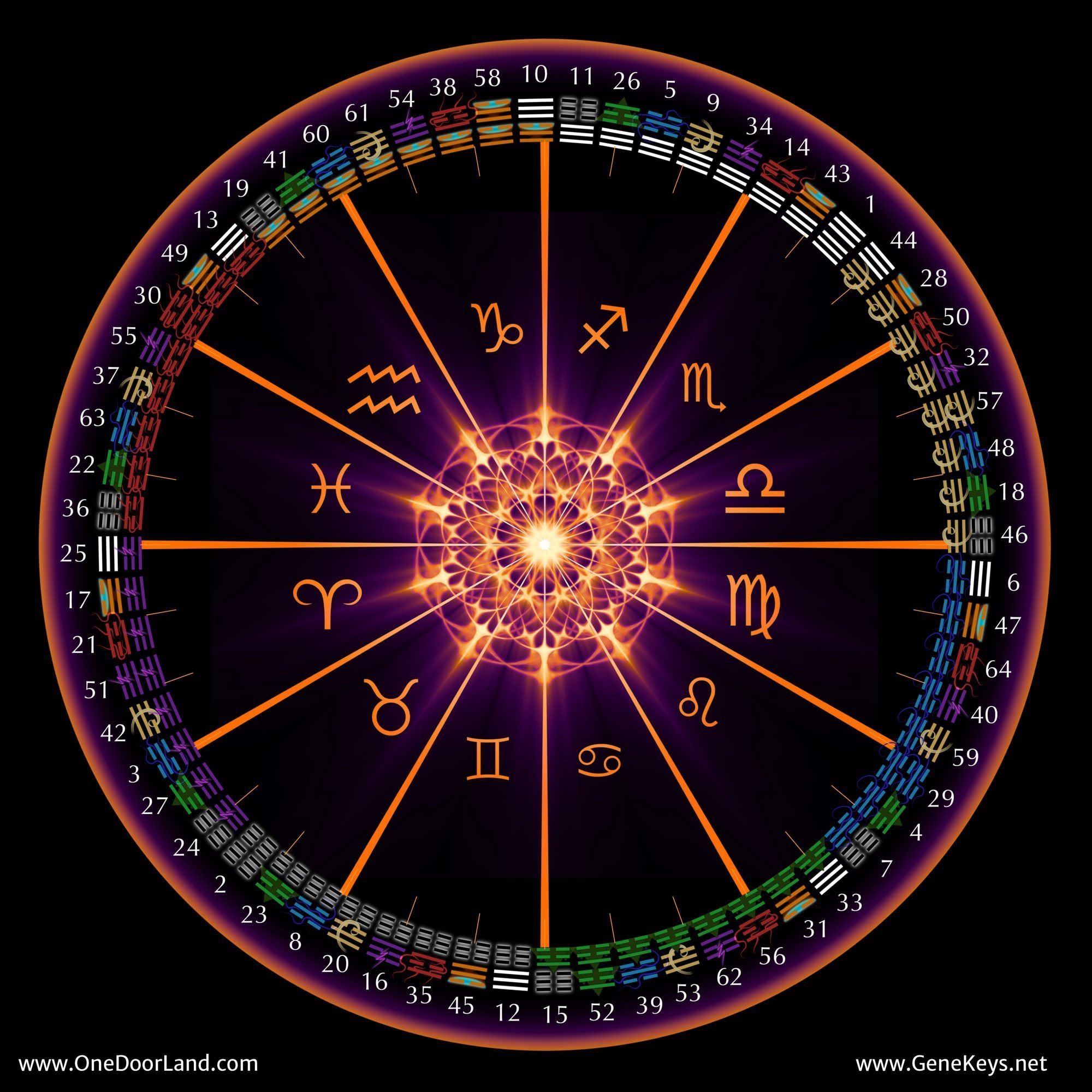 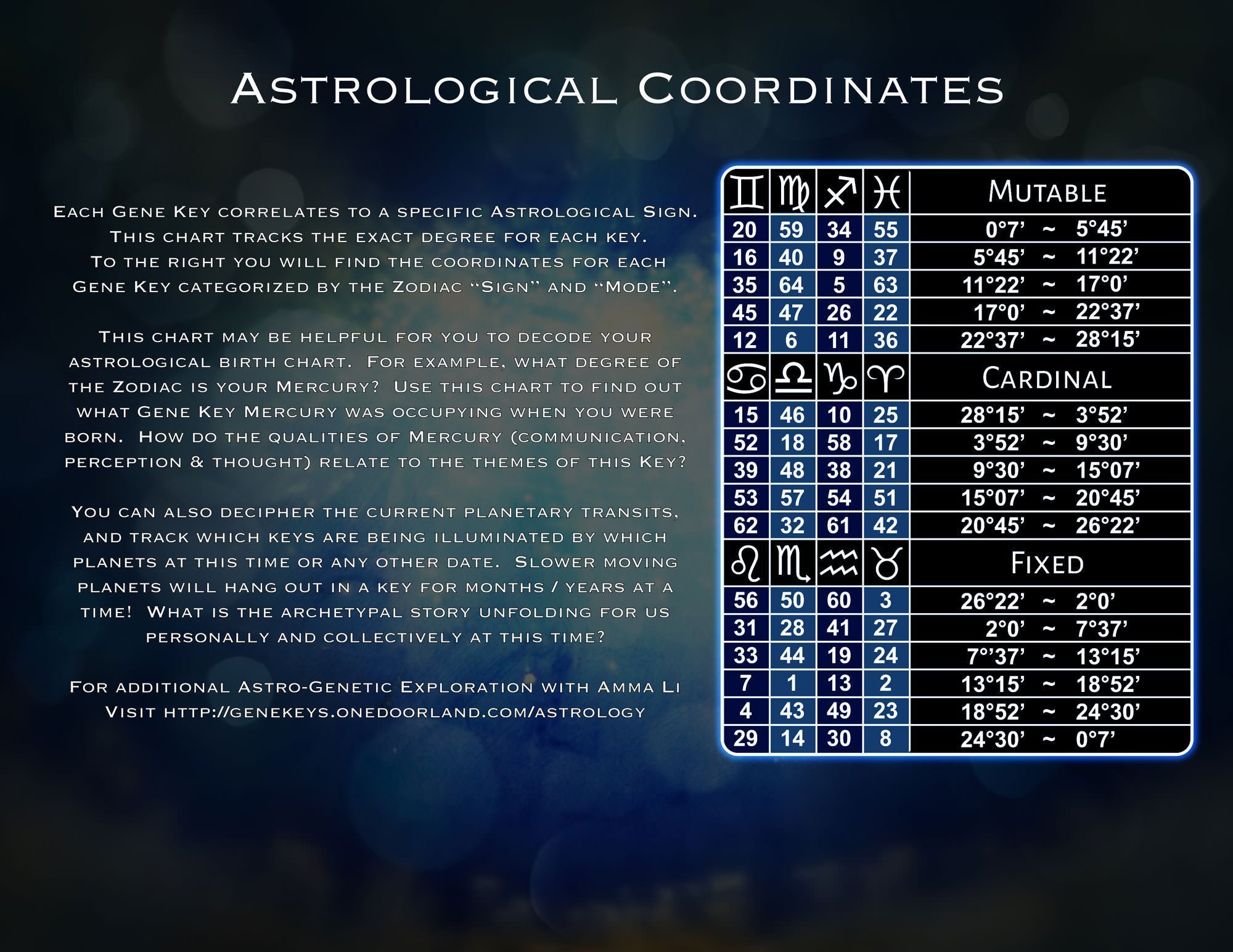 The Role of Astrology in the Gene Keys

“From time immemorial, mankind has devised intuitive systems to understand the rhythms and timing of when people are born.There are obvious and fundamental truths that different cultures have discovered. Each of the 64 Gene Keys has a position within the arc of the year, creating a unique genetic astrology for each of us.” Richard Rudd – Gene Key 15
The synthesis between the I Ching and Western Astrology compose the primary coordinates for the Gene Keys Transmission.  The hexagrams of the I Ching are the fundamental 64 genetic archetypes that make up the Gene Keys, and their overlay onto the Astrological wheel gives the Gene Keys context into our personal lives.
Set to a logarithmic pattern around the zodiac, each of the 64 hexagrams has a unique position along the wheel, finding its home in a particular astrological sign.  This Zodiacal I Ching is a finely tuned astro-genetic tool used most commonly in the Gene Keys to generate the Hologenetic Profile.  The planetary alignments on the day of one’s birth (and that of 88 days prior) are calculated using the hexagram wheel, determining a unique set of Gene Keys are laid out to form each individual blueprint.
“In the great wheeling arc of the 64 Gene Keys, every Gene Key has an exact position in relationship to the cosmos and thus filters the cosmic stream as it enters our planetary system.” Richard Rudd – Gene Key 11
The position of the planets at the time of birth gives us great meaning in our personal lives.  But it doesn’t stop there.  We can also track the current planetary positions, or transits, as they orbit the sun in relation to the earth.  Much can be revealed about our present reality and the the archetypal patterns playing out in our lives by mapping the movements of the planets through the Zodiacal I Ching.  Questions like: ‘ What Gene Key is the full moon in this month?’  -or- ‘Which of the 64 keys did Mercury go retrograde in last month?’ are inquiries we can explore together in the Lab with the Gene Keys ephemeris, or you can discover in your own personal astrological investigations.
A note for the astrologically minded: The hexagram wheel of the 64 correlates to the zodiac of Tropical astrology, as opposed to that of Sidereal astrology.  The tropical zodiac is based upon the relationship between the earth and the sun, where each sign correlates to the seasonal cycles of earth as it orbits the sun on its axis. For instance, each cardinal sign begins at the solstice and equinox points of each year.  Sidereal astrology, on the other hand, charts the signs to the position of the fixed star constellations in the sky, which due to the procession of the equinox is moving 1 degree every 71.6 years.

Gene Key of the Day is an exploration of the magic of the Gene Keys as it comes to life in our everyday lives. From the connection of Astrology and the celestial song of the planets swirling above us, to the creative genius emerging from our present moment awareness. Join our host Amma Li Grace as she engages in creative contemplation with the Gene Key of the Day.

You can support Gene Key of the Day and other Videos by Amma Li Grace by becoming a monthly subscriber on Patreon.